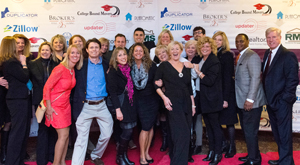 One very special night a year, Berkshire Hathaway HomeServices Verani Realty agents and staff from all across New Hampshire, Massachusetts and Maine gather to celebrate the unveiling of the company’s top Annual Ozzie Award winners.

A grand Red Carpet entrance sets the stage for the star studded evening – a ceremony dedicated to the founder of Verani Realty, Osvaldo “Ozzie” Verani. Agents dressed in their best gowns, tuxedoes and attire grace the Red Carpet for photos before heading into the Chubb Theatre at the Capitol Center for the Arts in Concord, NH for the awards show. 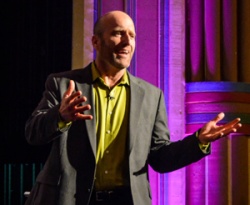 Before the awards were announced, attendees enjoyed guest motivational speaker Craig Zablocki and his hilarious take on what we can learn from children as adults. He talked about how their innocence, curiosity, confidence and fun outlook on life are important qualities that we should also remember to embrace. Speaking from the heart and with humor, he reminded us all that we learn and grow when we connect with others and have more fun in life.

Each year attendees also look forward to the Annual Video Contest. Agents and Staff let their creativity and acting skills shine as they produce their own renditions of today’s most popular commercials and TV Shows. These videos are always the centerpiece and laughter of the awards and a great way for everyone to participate. With live voting results - this year’s Video Award went to the Londonderry Office for their remake of a popular commercial in "It's Steve." The Londonderry Office also took home the Top Office of the Year award as well. 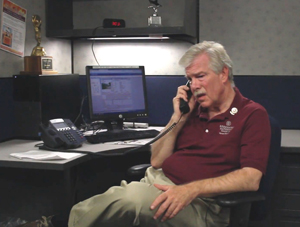 During the awards portion of the show several agents were honored and recognized by their peers. Margherita Verani (CEO), Giovanni Verani (President), Debbie Gallant (VP of Sales) and Steve McGuire (VP of Business Development) presented and handed out several awards including the coveted “Ozzie Award” to the Top 13 Individuals and Top 5 Teams in the company. Pictured left is Nicole Watkins, Moultonborough Office, who received the #1 Ozzie Award from Margherita & Giovanni. A complete list of Ozzie Award winners is listed to the left. 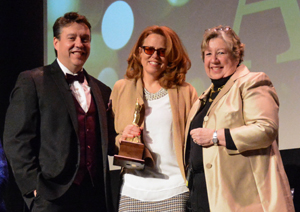 And finally, several agents were honored and awarded by our partners and affiliates, Residential Mortgage Services (RMS) and Broker’s Title.

The celebration continued with a live DJ, food, cocktails, networking, dancing and a 50/50 raffle for VeraniCARES (Verani’s philanthropic initiative for those in need). $850 was raised for VeraniCARES and what was even more impressive was the winner, Ginny Holmes from the Londonderry Office, donated her winnings of $425 back to the VeraniCARES foundation! This was truly an amazing and selfless gesture.

“We recognized many agents at this year’s Annual Ozzie Awards and I’d like to extend a big heartfelt congratulations to all of our winners! We are proud and honored to have the pleasure to work with each and every one of you. Your hard work, dedication and enthusiasm is the driving force behind your success and the success of our business.” noted Giovanni Verani, President.

©2020 MLS Property Information Network, Inc; The information in this listing was gathered from third party resources including the seller and public records. MLS Property Information Network, Inc. and its subscribers disclaim any and all representations or warranties as to the accuracy of this information.
Copyright 2020 New England Real Estate Network, Inc. All rights reserved. This information is deemed reliable, but not guaranteed. The data relating to real estate displayed on this Site comes in part from the IDX Program of NEREN. The information being provided is for consumers’ personal, non-commercial use and may not be used for any purpose other than to identify prospective properties consumers may be interested in purchasing. Data last updated May 28, 2020.
Maine Real Estate Information System, Inc. All Rights Reserved. Listing data is derived in whole or in part from the Maine IDX and is for consumers' personal, non-commercial use only. Dimensions are approximate and not guaranteed. All data should be independently verified.