Spotlight City: So many reasons to love real estate in Concord, NH 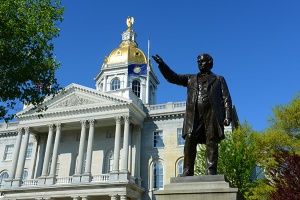 A first tip for newcomers to New Hampshire’s capitol city: the locals pronounce the second “o” with a soft “o” sound, so when you’re taking a tour of Concord, NH real estate, say it like “konk-kehrd” and you’ll hit the ground running.

Concord came into its own throughout the 18th century, and that is reflected in some of its earliest homes still standing along the northern stretch of Main Street – the city’s main downtown thoroughfare. Just down the road a few blocks stands the country’s oldest still-in-use capitol building, a gold-domed 1819 State House, which still houses New Hampshire’s legislature today – all 424 members (not a typo)! Incorporated in 1765 (though technically in existence since 1725 under the name of Penacook Plantation), signs of the city’s rich history is evident in the neighborhoods, homes, and cultural heritage on display in The Capitol City.

Known for its historic architecture, cultural hotspots, and independent shops and eateries, Concord’s Main Street is one to be proud of, having been recently renovated to encourage visitors to patronize the many businesses located on or around it. The $7.85 million Main Street Project was completed just this year, adding a new dimension to Concord, NH real estate and options for homeowners.

A variety of accolades

Here are a few awards that help illustrate why you should explore Concord and the real estate in Concord, NH.

Concord’s population is 42,700 people and is about a 20-minute drive to New Hampshire’s largest city of Manchester, 46 miles from Portsmouth; and 68 miles from Boston.

Over the last six months, market trends indicate an increase of $46 (or 41%) in the average price per square foot, and median sale price rose from $205,725 to $220,000. Concord, NH homes for sale spend about 122 days on the market on average, and buyers should expect to pay 97% of the seller’s asking price.

Open space, outdoor amenities, the Merrimack River, and conservation area abound in Concord, which is also home to the NH Audubon Center, Capitol Center for the Arts, Concord Community Music School, the Museum of NH History, the Society for the Protection of NH Forests, the McAuliffe-Shepard Discovery Center and Observatory, and every recreational amenity possible – from golf courses to roller derby rinks.

As you explore Concord, NH homes for sale, enlist the help of a Verani Realty real estate agent well-versed in the city’s unique neighborhoods and planned development around them. They’ll be by your side as you explore the walkable city, its retail districts, or how to pronounce some of those tricky street names.

©2020 MLS Property Information Network, Inc; The information in this listing was gathered from third party resources including the seller and public records. MLS Property Information Network, Inc. and its subscribers disclaim any and all representations or warranties as to the accuracy of this information.
Copyright 2020 New England Real Estate Network, Inc. All rights reserved. This information is deemed reliable, but not guaranteed. The data relating to real estate displayed on this Site comes in part from the IDX Program of NEREN. The information being provided is for consumers’ personal, non-commercial use and may not be used for any purpose other than to identify prospective properties consumers may be interested in purchasing. Data last updated July 9, 2020.

Listing data is derived in whole or in part from the Maine IDX and is for consumers' personal, noncommercial use only. Dimensions are approximate and not guaranteed. All data should be independently verified. © 2020 Maine Real Estate Information System, Inc. All Rights Reserved